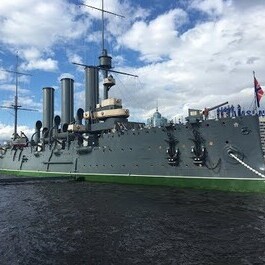 The cruiser was built in 1900 in St. Petersburg. It joined the Navy in 1903 and took part in the notorious Tsushima battle in the unsuccessful Russo-Japanese War of 1904-1905. It participated in the navy battles on the Baltic Sea during World War I.

In 1917 when in Petrograd, the cruiser’s crew was one of the first in the Baltic fleet to take the side of the revolutionaries. On the night of October 25, 1917, the gun of the cruiser fired a blank shot which was a signal for revolutionary soldiers to storm the Winter Palace (then the residence of the Provisional Government). Although the facts of the blank shot and the storm are doubted by modern historians, the cruiser became one the main symbols of revolutionary history in the USSR.

On board you will see exhibits dedicated to the history of the cruiser. A tour of the engine-room is available for an extra fee.

Can be visited during the City Highlights tour or on Tsars and Revolutionaries tour.