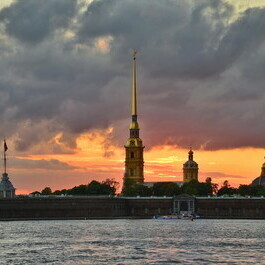 One of the city’s first structures, founded by Peter the Great in 1703 as a powerbase, it became a high security political jail which housed a number of Russia’s most influential residents.

Peter and Paul’s Cathedral is one of the oldest symbols of St. Petersburg and is the burial place of nearly all Russian Emperors and Empresses from Peter the Great to Nicholas II.

During your private guided tour, you will hear the stories about the foundation of St. Petersburg, the history of the Royal family, and learn about the most famous prisoners which the fortress’ jail has detained.

We recommend to visit Peter and Paul’s Fortress and cathedral during the City Highlights Tour.