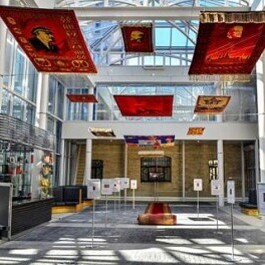 This museum is located not far from Peter and Paul Fortress in a nice art nouveau mansion. The destiny of the building is quite remarkable: originally built for a ballerina Matilda Kshesinskaya, the mistress of Nicholas II before his marriage. It was turned by the Bolsheviks into one of their headquarters in 1917. It still retains a study where Lenin worked and a balcony from which he made a speech to the revolutionary soldiers. After 1957, the building became the Museum of the Revolution and after 1991, it radically changed its concept and was renamed the Museum of Political History.

The museum's collection consists of more than 500,000 exhibits and embraces all changes in political life of the country from the Russian Empire to the Revolution of 1917, the USSR, “Perestroika”, and the political life of contemporary Russia. In the collection are documents, posters, banners, photos, and belongings of politicians and statesmen including: Nicholas II, Lenin, Gorbachev.

A visit to the museum can be included in the “Tsars and Revolutionaries" special tour.