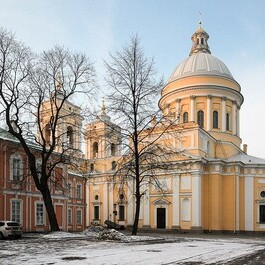 This monastery was founded by Peter the Great in 1710 and named after St. Alexander Nevsky, a prince, canonized by the Russian Orthodox Church. St. Alexander was declared a patron of St. Petersburg, and his relics were housed in the monastery which became one of the most important spiritual centers of the Russain Empire, visited by thousands of pilgrims. In 1797, the monastery received the rank of Lavra, having become only the third Lavra in the Russian Church (after the Kiev Monastery of the Caves and Trinity Monastery of St. Sergius).

During the tour of the monastery, you will visit the majestic Holy Trinity Cathedral, built in the neoclassical style. You will also visit the most famous cemetery in St. Petersburg (“Nekropolis”) where Dostoevsky, Musorgsky, Tchaikowsky, Glinka, Rimsky-Korsakov, and other famous writers, musicians, and artists are buried.

A visit to the monastery icon-painting workshop and Spiritual Academy can be organized on special request.