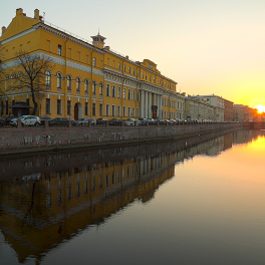 Yusupov is, perhaps, the most famous among the aristocratic palaces of the city. Since 1830, the Yusupov palace remained the home for 5 generations of the extremely wealthy Yusupov family until nationalized in 1917. Fortunately, the palace was given to the educational authorities to become a kind of a clubhouse for the city's teachers which helped to preserve most of the original interiors including the reception rooms, living quarters, and the unique rococo palace theatre.

On 16 December, 1916 the murder of Rasputin took place in the basement of the Yusupov Palace.

Enjoy the unique, original interiors of one of the oldest palaces in St. Petersburg. Learn about the history of the 5 generations of the Yusupovs, the legends surrounding this intriguing palace, facts and  unknown details of the murder of Rasputin. See a display with photos, documents, and wax figures in the basement where the murder was committed.

Please note: the Rasputin’s exhibition can only be visited by a guided tour.

The palace can be visited during the “Secrets of the Romanovs” special tour.