The Peterhof Palace and Fountains Tour with Transfer

Half-day tour to one of the most spectacular imperial estate

In this four-hour  Peterhof  Palace and Gardens Tour from St. Petersburg, we will join a historian to see the magnificent palace and gardens of Petrodvorets. As we walk with an expert in history or art history, we’ll contextualize the architectural and historical significance of this immense site—including the expansive royal gardens designed by renowned landscape.

Peterhof is perhaps St. Petersburg's most spectacular imperial estate. Nestled on the shore of the Gulf of Finland (part of the Baltic Sea), the palace was built on a sixteen-metre-high bluff lying less than a hundred metres from the shore.

The palace was initially built by Peter the Great as a resting place. Some buildings still retain the modest style of “Peter’s Dutch”.  First Peter, and then Elizabeth, intended to rival the famous Versailles in France, so the garden was decorated with fountains operating without pumps while the palace was redecorated by F. Rastrelli in the glamorous style of “Elizabeth’s Baroque”.

Peterhof reminds us both of the epoch of Peter with his passion for the sea and water, and the time of generous and frivolous “Merry Empress”, Elizabeth.

Need more than one palace on tour? Customize it!

Whether you already have something in mind or would like to craft something entirely new, our dedicated team are at hand to help you develop a tour that will be just right for you. Here’s a list to get inspired by: 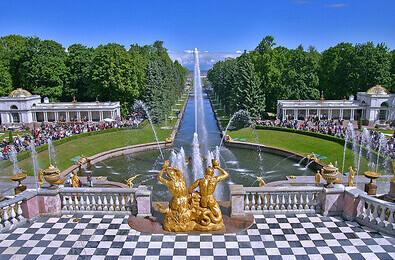 Length
4 hours
Activity
Basic
Group size
min: 1 person
max: 54
Guided visits
Upper and Lower Fountain Parks
- Children up to 6 years: free of charge
- Children from 7 to 17 years and students (with ISIC only): $ 10 discount
Price includes:
- private expert guide,
- private air-conditioned vehicle,
- headsets for more than 7 people
Price does not include:
- Gratuities for guide and driver
This is a sample tour.
If you are interested in a more active program we can recommend you the following popular inside visits:
Grand Palace (USD 25 p/p) Monplaisir (USD 10 p/p) Cottage Palace (USD 15 p/p)

Grand Palace
At first, it was designed by Jean-Baptiste Le Blond as a modest palace. The building was completed in 1721. However, the palace appeared to be inadequate after the gardens were redecorated with the magnificent golden fountains. Bartolomeo Rastrelli, who was commissioned by Elizabeth to redecorate the palace, expanded it by adding wings and pavilions with gilded domes. The interiors were redecorated in lavish, baroque style. Some of them were later redone in “Catherine’s Classical” style during the reign of this empress.
Please note: In our opinion, the interiors of the Grand Palace and Catherine’s Palace bear certain similarity in styles both being a combination of “Elizabeth’s Baroque” and “Catherine’s Classic”. If you have Catherine’s palace on your agenda, we would recommend to do without an inside visit to the Grand Palace. Instead, we suggest you spend more time walking around the beautiful,peaceful, and entertaining fountain parks or visiting Monplaisir or the Cottage palaces.
Monplaisir Palace
This small but absolutely unique palace was designed by Peter for himself and remained his favorite retreat where he liked to receive and entertain his closest friends. It is the only palace where so much reminds us of the spirit of Peter the Great. When inside, you can see a kitchen in the Dutch style, which Peter was so fond of, where his food was prepared. You can also tour Peter’s study with the view of the Gulf of Finland, his bedroom, and even a bathroom.
Cottage Palace
Named after Alexandra Fedorovna, the wife of Nicholas I, after he commissioned a Scottish architect, A. Menelaws, to create an English park and a palace styled like a cottage. Cottage Palace is an extremely elegant building where you can feel the spirit of privacy and everyday life of Nicholas I, Alexandra, their children and grandchildren.
Your interests are of great interest to us! If you want your tour related back to a topic you are interested in,
please let us know on the TOUR REQUEST and we will tailor it accordingly.
Request
Land tour REQUEST FORM
* FULL name
* E-mail
Arrival date
Departure date
Hotel
Tour language
* Required fields
Tour comments
Adults
CHILDREN UNDER 7 Y.O.
CHILDREN 7-17 Y.O.
STUDENTS WITH ISIC
Submit
Book
Land tour Booking FORM
TOUR CONDITIONS/ FAQ

After working with Tailored Tours team to customize a tour for my family (2 seniors, 2 adults, and a 12yo), we spent a day in St. Petersburg with Sergei and a driver. We toured the Peterhof Fountains and many great sites throughout the city of St. Petersburg. Sergei was engaging, informative, and fun to be around. Also, because we were in St. Petersburg on the day of a marathon that disrupted traffic, Sergei took us on an unexpected tour of the metro - giving us the history of each station along the way. That wound up being a highlight of the day!For our group, the personalized tour was less expensive than the excursions our cruise ship offered and we got to see a lot more. This group gets my highest recommendation.

We wanted to express our sincere appreciation for the lovely tour your team provided. We will heartily recommend your business to anyone traveling to your beautiful city. The whole process of setting up the trip was seamless easy.
Thanks again
Rebecca
Read more..