See the city of Pushkin and Dostoevsky, walk Crime and Punishment district

St. Petersburg has been a continual source of inspiration for poets and writers such as: Pushkin, Dostoevsky, Gogol, Nabokov, Brodsky, Ayn Rand, and many others.. Experience their works come to life as you walk the footsteps of your favorite characters. The town of “The Queen of Spade” and “Crime and Punishment” does exist in reality. See the houses and neighborhoods which inspired such timeless tales by these literary giants.

It was here that Pushkin created some of his most famous works such as: “The Bronze Horseman”, “Eugene Onegin”, and “The Queen of Spades”.

We will see a part of the city known as “St. Petersburg of Pushkin”- a peaceful and beautiful part of the city further away from the hustle and bustle of the city center. Here, you can see tranquil palaces and mansions along the Moika River. You can visit the Museum of Pushkin located in the house where he lived, worked, and died.

Dostoevsky came to St. Petersburg in the year of Pushkin’s death (1837). The part of the city where he lived was known as “the guts” of the city at that time. The sensation of St. Petersburg’s Dostoevsky appeared thanks to the novel “Crime and Punishment” which was written here in 1866. In this famous and “the most St. Petersburg” novel of all, he gave a detailed, even scrupulous description of Sennaya Square district.  We will walk the footsteps of the heroes of the novel, see the houses of Raskolnikov, Sonia, and Aliona Ivanovna , and see the houses where the writer lived. 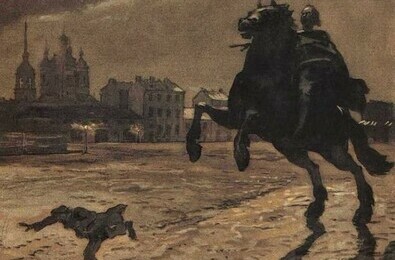