Vodka is a national drink of Russia, although little is known outside the country about technology of its production (over 90% of vodka on international market is produced OUTSIDE Russia). On our Russian Vodka Tour in St. Petersburg visit a production line of the famous premium vodka from St. Petersburg named “Tsarskaya” (the Tsars' Vodka). A detailed tour demonstrates all the aspects of vodka production:

With the help of sommelier you will taste several types of vodka, including nastoika (vodka infused with herbs, roots, seeds, or leaves) and nalivka (fruit flavored vodka), and learn how to pair vodka with different dishes during sumptuous lunch afterwards.

We also offer an optional add-on of the Vodka Tour in the Russian Vodka Museum where you will learn a lot on what role vodka played in various moments of the Russian history: from Peter the Great’s “penalty shot” to Gorbachev's unsuccessful “dry law” in the days of “Perestroika”.  The tour add-on includes lunch and tasting!

Russian Vodka Tour in St. Petersburg is conducted by a professional guide who will pick you up from your hotel or cruise ship and drive you back after tour safely.

Looking to learn more about the Russian culture? Customize your tour using the following tour options: 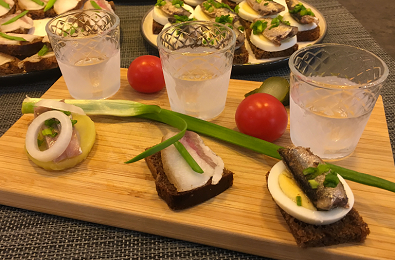 We recently took a three day tour of St. Petersburg with Tailored Tours. There were six of us in the van with his excellent driver. Everything worked exactly as he promised. No problem with Russian visas. We were able to tailor the trip to suit our interests, including a subway ride and a vodka cruise, along with visits to many churches and palaces. The guide and his assistant were very knowledgeable and did a great job explaining things to us. There is a reason that all the reviews on this site are "Excellent".

My husband and I booked a private tour for two with Tailored Tours over two days in August while our cruise ship was in port at St. Petersburg. Our guide Sergei has a PhD in art history and was, needless to say, extremely knowledgeable about all we saw. We also appreciated that he was able to steer us to the highlights at each of the sites being cognizant of our limited time. We also very much enjoyed the two restaurants that he chose to expose us to the variety of Russian cuisine. I am still raving to family and friends about the borscht I had at Tsarskoe Selo. The other restaurant was an Azerbaijan restaurant in St. Petersburg that was also excellent and unique in its offerings. Both drivers that we had, Alexander and Viktor, were efficient and professional. At no time did we have to wait more than a few minutes to be whisked away to another site. A highlight of the tour was the opportunity to see and use the beautiful metro stations built during the Soviet period. Sergei told us that they were called "the people's palaces" and they are spectacular. I would highly recommend Tailored Tours Team to anyone visiting St. Petersburg. Our only regret was that we didn't have more time to explore this beautiful city.